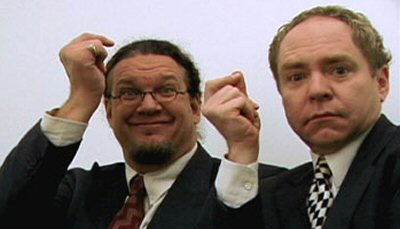 OK. So I helped NBC and the TV industry last month with a critique of the Olympics coverage. Now Hollywood needs help.

During the Oscars (go Jon Stewart!) they made a lot of noise about getting people back into the movie theatres to see movies. Why? Because they make more money if we do than if we rent a DVD. Duh.

So lets start there. Movie Industry: Do you really think we’re so dumb that we don’t know why you’re saying this? Home Entertainment Systems are as good as anything you can throw into a building. I know, my neighbors have a great one and I can get my martini shaken (not stirred) by setting it on the table when they have that bad boy blasting. Maybe they aren’t as big, but the quality of the image is damn near perfect and you can sit where ever you want to get the full effect.

Next, watching at home means you can pause the movie or rewind over dialog where people are mumbling or whatever. You’re more likely to be able to watch in peace at home too without idiots talking or making noise. And you don’t have to drive to it - find parking - wait in line - and eat crappy snacks. What does the “movie going experience” really offer? Nothing people are willing to spend an extra $7 for.

Next, your promotion techniques suck major ass. I have lost track of how many DVD’s I’ve rented where the advertising campaign for the movie completely misrepresented the flick. I recently reviewed “Lord of War” on my site, that’s a perfect example. Hollywood promoted this movie as a “comedy-drama” and the openning credits have a guy getting shot right square in the head from the bullet’s point of view.

People going to a theatre expecting “comedy” will be somewhat put off by this kind of bait-and-switch. And this trend if becoming more prevalent. So stop promoting movies to “demographics” - promote a movie for what it is and people who like that kind of movie will go and see it. What happens otherwise is people will walk out on a movie that they felt tricked into seeing and not go back to your precious movie theatre.

And while we’re at it; enough with the sound bites from reviewers of a movie. Two or three or four words taken out of context mean nothing. It’s just another shallow ploy to drag people into those precious theatres. And, once again, what happens when people go and find that the movie that was “a sure oscar winner” turns out to be a tepid bowl of puss? Hey, they don’t go to the theatres again … they’ll rent the thing on DVD and if it sucks, they just turn it off and only wasted twenty minutes and one dollar.

Look, Hollywood makes some great movies. They make a lot of crappy ones too. But somehow they seem to have convinced themselves that if they say it’s great we’ll believe them and spend $10 a pop to drive to a crowded theatre and watch it. Now days when there are better more convenient alternatives, this is no longer the case. And box office sales are proving it. What worked in the lasst century is not working now.

So be honest about your work, attract people to see a movie who will enjoy and appreciate it. And tell their friends. That is how you regain your movie-going audience - not through trickery.

Face facts, in today’s economy and with today’s home entertainment technology, going to a movie theatre is either a luxury or an inconvenience or both. Every lie you tell us, Hollywood, reduces the odds of us going back for more.

Get it? Got it? Good. You’ll get my bill for this next week.