(From the arkives … A tale from the Dawn of Flight Sims, and my squads part in tarnishing it.) 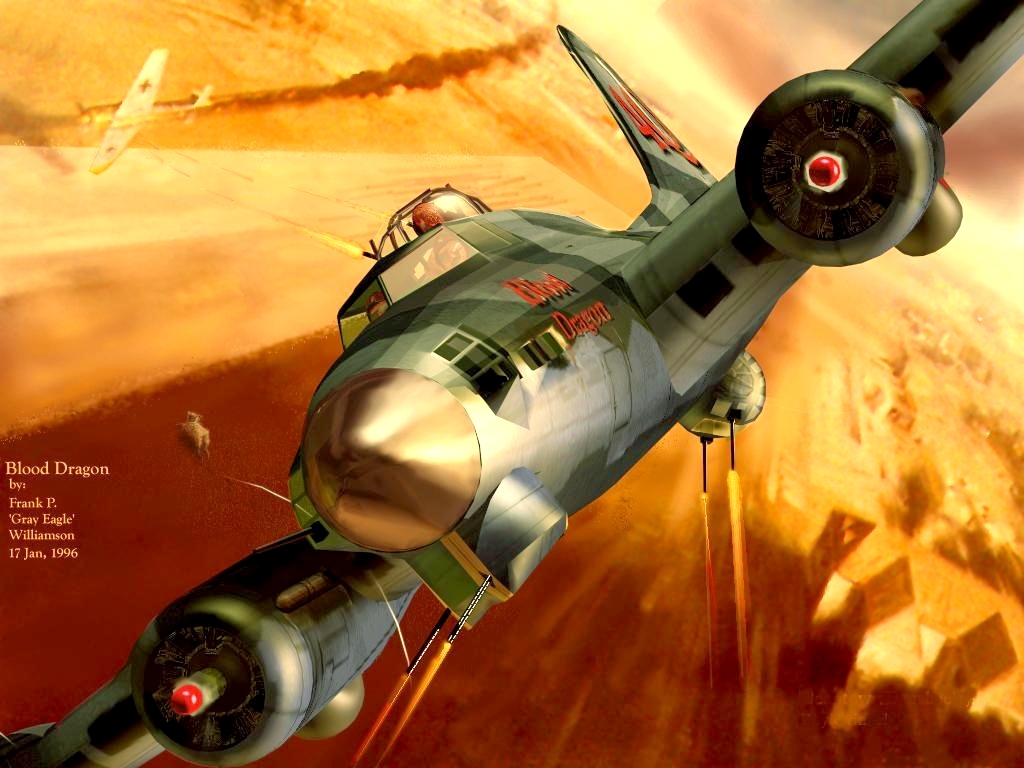 The "Blood Dragon" at work, by "Grey Eagle"

One bright and sunny day, a newcomer came to B-land. His name was Ben Dover. He was truely a merry fellow who took great delight in stomping on the heads of kittens with big lumberjack boots, twisting at the ankle until the little feline brains came gooshing out.In any event, on this particular day GCB Biggles was engaged in running bombing raids down to old A3 (in the Valley of Death). Ben pleaded with Biggles to let him pilot the B17 once and eventually Biggles agreed, if for no other reason that to get some peace. Biggles had flown well so far, the AA guns at A3 were down and the A’s were in a foul mood. Ben called for gunners and several signed on. With hearts high, Ben taxied the B17 off into destiny.

Biggles knew something was up when Ben did a crisp vertical banked turn to A3 right on takeoff, milking up the flaps and landing gear as he completed the turn. “I’ve been practicing offline”, said Ben with a slight smirk. Biggles wasn’t completely satisfied, but decided to just let it drop. Ben climbed the B17 to around 1000 feet and settled into a standard target approach. The A’s then picked him up on radar.

“Hang on to your asses, here we go.”, hollered Ben. With which he barreled down to the deck, levelling off at about 10 feet. Ben was having great fun lopping the heads off cattle and Jehovas Witnesses as he sped along at naught altitude. The A’s were greatly miffed and showed their displeasure by augering dead astern of Ben’s B17.

Now they were approaching A3. A-land fighters were crashing left and right, unaccustomed to pursuit at such low altitudes. “Someone get into the chin turret and shoot the one on the pad!”, ordered Ben. “Won’t get enough hits for a kill”, shouted one of the gunners. “Trust me”, said Ben. As they crossed the fence the B17 shuddered lightly as Ben loosed one stick of bombs on the empty take-off spot of A3. Just then several A fighters appeared, the chin gunner started firing furiously.

“Boom-boom-boom-boom-boom-boom” went the bombs. “XXXX detroyed, YYYY destroyed, ZZZZ destroyed” came the messages from the host. “3 kills!”, hollered the chin gunner. “Bombed em,” said Ben, “all gunners aim left over the wing.” At that moment Ben racked the B17 into a tight, tight, tight maximum performance pylon turn over the takeoff spot of A3. He was at 250 feet with flaps down and pulling around 3 G’s at 80 knots.

The A’s kept popping up, but the massive fire of 4 B17 turrets dispatched most of them before they could even get airborne. The few that did, even Zero’s, found they could not keep on the tail of the B17 before the gunners laid waste to them. “Keep shooting!”, ordered Ben. Round and round they went, Ben holding the turn by using the amazing autopilot feature of the B17. Indeed, Ben’s rigorous flight testing had discovered that at low altitude with everything hanging, the B17 under autopilot could turn tighter and at lower speeds that a Zero under manual control.

The A’s were finally starting to register some hits, so Ben decided to beat a retreat. “We need escort home, B’s!”, he called on channel 2. “On the way.”, replied the B fighters. “OK, I’m gonna swing wide the pass, nail anything on the pad as we cross.” Ben eased up on the stick and the B17 swung wide to the south. Then he sucked it in and the nose swung crisply across the end of A3. Again, there was a slight tremor as Ben loosed a stick of bombs, skipping them in off the turn.As if on cue, A fighters appeared at the takeoff spot. Seconds later they were destroyed by the stick of bombs. Ben pulled in the flaps and enterred a shallow dive down to 5 feet. All the gunners were aiming aft. The A’s finally got sorted out and began their pursuit. They were closing and the B border was still very far indeed. But B fighters were closing fast. Ben and his sturdy crew needed to buy some time.

The A fighters were now within 1500 yards. “OK, hang on.”, Ben said to his crew. He then cranked in a 90 degree banked turn right on the deck. Steadying the turn with light doses of rudder and stick. The A’s blew past, taking hits from the gunners as they flew by. A few A’s crashed, not watching their altitude closely enough.

Once, twice, three times, four times they went around in the gut wrenching turn. The B fighters finally were on the scene and Ben went wings level and headed for home. Minutes later they were over home turf and safely on their way to B2. Ben asked his gunners how they did. They were all laughing quite hard, but managed to report approximately 17 kills. Ben swung the B17 around in a break-turn approach to B2, dropping flaps and gear as he decellerated. He gently set the battered ship down. Once on the ground, Biggles stopped laughing long enough to ask Ben who he REALLY was. “C’est DoK”, replied Ben.

And so was born the Blood Dragon. Over the next few weeks, The Spanish Inquisition would fly almost non-stop Blood Dragon raids to A3 and C1. Sometimes as many as 2 Dragon ships were orbitting low over the enemy fields. The devestation was impressive, often as many as a dozen enemy fighters would be clawing at the tail of the Dragon ship, just barely above stall speed, only to be blown away by the punishing gunnery of the ship’s crew. Sometimes the ship would have to literally drive back to home territory as it didn’t have enough lift to maintain level flight. Often the mighty Dragons would land back home with only the autopilot left for controls and on only one or two engines. Ben’s record for a Blood Dragon was 34 kills neatly landed back at base, not counting bombing points.

But the days of the Blood Dragon were nearing an end. Already the A’s were learning to use stationary bombers with gunners as AA emplacements. This could be suppressed for a while by using DoK’s low-level skip bombing technique while in the pylon turn. But soon, with the increased firepower of the FW-190 and the reduced ammo of the B17 gunner, the Blood Dragon faded into history. But for those that flew in them - DoK, Biggles, Pax, Flush Garden, Trips, Boomer, Petie, Tango Circus, and Shoestring - the memory of raining death on the enemy from a slight perch 200 feet over their runway will always bring a smile, and maybe a little drool.