The Cartoon is Mightier than the Sword 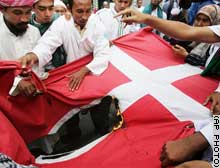 So this week the world was rocked by a round of Muslim protests over … a cartoon printed in a newspaper. Riots, random gunfire, flags being burned (though not American ones for a change). Over a cartoon. And newspapers and television networks are firing people and vowing not to air this oh-so-offensive piece of material.

Say what? OK, so sometimes the “freedom” of the press is the freedom to not publish or broadcast things that will stir up trouble. So in today’s politically correct, “Forgive me for being an American,” world these decisions kind of make sense.

But it’s the double- and triple-standards that are in play that are sickening. CNN won’t show a cartoon which rips on an Islamic leader, but will show footage of Arab protesters burning the American flag, and will give prime air time to ding bats who say that the Holocaust never happened. How is one any less inflammatory or offensive than another?

Because only one will get your overseas offices burned to the friggin’ ground and your reporters taken out and shot and their bodies dragged through the streets, that’s why. In this case, “the terrorists have won.”

And maybe the Muslim world should wake up and realize that, hey, they are the ones doing 90% of the terrorism in the world and maybe everyone else has a reason to distrust them because of it. Cartoons like the one which caused this stink are no accident, after all.

And to their credit many Muslim leaders and speakers are taking such a stand. But the effects are wrong. One such person, Jihad Momeni an editor for Jordan’s Shihan tabloid, asked in his editorial, “Who offends Islam more? A foreigner who endeavors to draw the prophet as described by his followers in the world, or a Muslim with an explosive belt who commits suicide in a wedding party in Amman or elsewhere?”

He was fired. I doubt it was because the paper disagreed with him, either.