GonZoville has been around since 1998. Since I don't have much time for active blogging these days, and don't need the hassle of managing a WordPress site, I've reduced the content down to the 'greatest hits' and re-published that subset as a static site using Jekyll. Most of the content will be pre-2010 as that's when Real Life™ stuck it's nose into my affairs.

For Love or Money

Why Valentine’s Day Sucks … and why it shouldn’t. 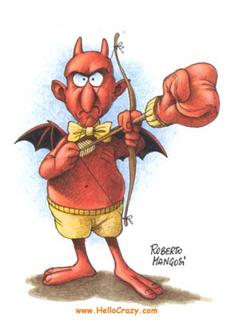 The annual rite known as “Valentine’s Day” should be a happy one. Married couples should be able to step out of their dual-income, mortgage-paying blight and do something romantic and/or kinky on that day. People in relationships should be able to spend the day doing something to celebrate and strengthen their union … or at least try something new together. And for the mass of the populace who are alone, it should be an occasion to roll the dice once more and try to find “someone.”

But, thanks to the gaping maw of the beast called “marketing” Valentine’s Day is none of those things. It is a guilt-ridden, ego-shattering continuation of the depressing shit-tide that comes during the Christmas buying blitz. You just barely start paying off your VISA and MasterCard from Christmas and there, once again on the TV and newspapers, you’re being told to buy jewelry, cars, clothes, vacations, … and erectile disfunction pills … for the One You Love on that Special Day.

Now, of course, this starts to sound like I’m too cheap to buy stuff for the women in my life. Which is as far from the truth as can be. The problem is that Valentine’s Day has become so commercialized that anything you do buy for someone is next to meaningless.

I guess I still cling to a kind of old-fashioned view of courtship. And that includes getting things for the one you’re courting to make her happy (and she should do the same for you, by the way). And that sort of outlook is kind of impossible when the media has pounded into every woman’s head what she’s supposed to want to receive on Valentine’s Day.

Of course, some of this is due to the fact that I live in California. And, worse still, Los Angeles. Where there are thousands of gorgeous women and probably as many guys running around who are worth 7-figures. This city’s culture of “success” breeds a very bottom-line oriented female. Trying to have a peer-level relationship with such women where there is no financial component is next to hopeless. Because they can Maximize Their Assets to land a rich guy any time they want, they don’t need to show traits such as loyalty, gratitude, or kindness. They can get away with being bitches … or worse.

And they know that if they get tired of chasing whatever dream they have … like, if it becomes “work” … all they need to do is get a new set of knockers installed and shake their butt and they’re sure to find someone twenty years their senior and a million dollars richer to take care of them. For as long as they can stand the guy, or stay young looking, anyway.

And that’s where these “relationships” fall apart a lot it seems. Eventually either the woman tires of being a trophy or the guy wants a younger trophy.

Which leads back to Valentine’s Day. Because the kind of woman I just described are now held up as if not positive, certainly not negative, role models. Nothing you buy such a woman will measure up - unless its a car or something like that. Which means the whole “package” that we’re being sold on Valentine’s Day only applies to a very small percentage of the population - the ones who can afford all that crap. Because everyone else either doesn’t have the money, or isn’t buying for their dream-girl. Not the dream girl we’ve been told we should have, anyway. The disconnect between what we’re being told we should strive for on this “Holiday” and what most of us have a shot in Hell of getting is immense.

Which is not to say that women are immune to the downer that is Valentine’s Day. A woman without a man in her life at this time of year often feels like a “loser.” That is how completely they have bought into this marketing gimmick - they actually let it affect their mood. While men may be the financial victims of the Marketing Machine, women are the emotional ones. Either they feel worthless if they get nothing or what they get probably won’t measure up to what they’re told they should be getting.

So, what’s to be done? Well, for starters make sure whoever you celebrate the day with is grounded. Next, forget everything that you see in the media about what to do for Valentine’s Day. Then the two of you decide on something fun to do together that day. Take a day trip, stay home and watch movies, wife-swap, experiment with battery-operated devices and personal lubricants. Do something together so that the next day you **both **say: “Wow, what a fun Valentine’s Day.”