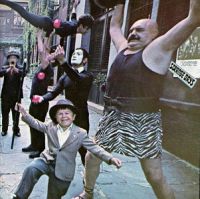 People who don’t live in Los Angeles, or California for that matter, often ask me what it’s like out here. Well, there are times I wish I carried a camera around all the time, or had a camera phone. Because the stuff one sees in a week around this city is enough weirdness for a whole year just about anyplace else. And it’s not the overt whack-job channeling George Patton on the street corner. It’s more of a mellow, do-your-own-thing, weirdness.

Here are some things I’ve seen from just the last few weeks.