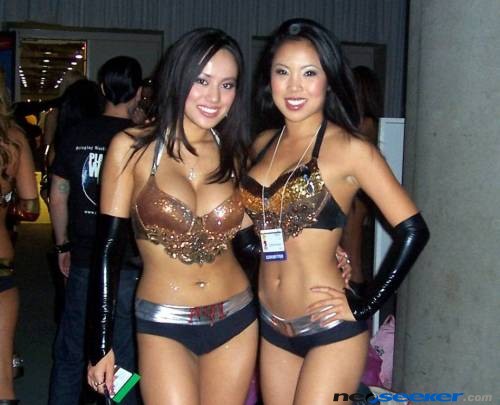 Well this little nugget of news raised the bar on narrow-mindedness - fining companies for having booth-babes who are dressed too scantily. They already don’t allow anyone under 18 into E3, so you have an adult audience. Who are they trying to protect from what? And what’s the big deal with showing a little skin? This is LA. Hollyweird.

Other articles claim this is an issue of “respecting women.” Meaning they want more women to buy video games. Hey, how about rather than make the booth babes cover up, they have a few booth dudes for the women to gush over and have pictures taken with? Wouldn’t that be just as fair? Sure … but then the moralistic swine who want to tell everyone else what they can and cannot see wouldn’t get their say.

Video game “booth babes” forced to cover up
By Daisuke Wakabayashi
Thu May 11, 9:45 AM ET

The video game industry’s annual trade show in Los Angeles opened its doors to its exhibitors on Wednesday with organizers ordering women staffing the booths to cover up or face a $5,000 fine. Banned are nudity, partial nudity, bikini bottoms or any sexually explicit or provocative conduct, according to the handbook from The Entertainment Software Association, or ESA, which owns and operates the E3 Expo.

She said another of the models received a warning from show organizers for showing too much skin. “Apparently her cleavage was a little too distracting,” she said.

In January, the ESA outlined tough new penalties to enforce decency rules. Exhibitors get a verbal warning for a first violation and a second violation carries a $5,000 fine.

“Last year there were a lot of complaints about how the models were beyond, in many cases, what was decent,” said ESA President Douglas Lowenstein on Monday.

Despite the new rules, there was no shortage of exposed skin, patent leather and knee-high boots. Many exhibitors dressed women like video game heroines and there was a group of women wearing sexy nurses’ outfits.

“They’re wearing slightly more clothes this year,” said Gail Salamanica, an exhibitor at the show, “But not much.”

Now, what’s really funny was some of the responses from the blogosphere on this. I pulled these from an article on c-net:

“Considering that they always openly admit that they know nothing about video games, I think booth babes should be sent home. Probably won’t ever happen, but it’s pretty insulting (to them and to nerds) that their entire purpose is to draw people in with skin.” -billygoten

“I’m sure that this is a sign of the video-game industry maturing and beginning to recognize that focusing on the physical attributes only of women is demeaning to both men and women.” - postmodernbarney

“I’ve always found the whole idea of booth babes to be rather stupid and insulting. They are equally prevalent at car shows, and it’s annoying. The thought that I’m going to be more interested in a product because some attractive woman is associated it on the shallowest of bases is dumb.” - Dwight Silverman on TechBlog

Lordy … what’s with this PC crap?

For starters, a lot of these girls actually do know about the games. A lot of them really look forward to E3 because it’s a cool show to go to. And a lot of them enjoy meeting their fans - many of whom they interact with online - at the show.

And, hey, here’s a novel concept: games are entertainment. This ain’t rocket surgery, you play games to have fun. To inject this kind of political correctness into an adults-only event in the “Entertainment Capital of the World” is absurd.

But lets not kid ourselves, the Corporations care about as much about “respecting women” as Dick Cheney cares about gun control. They respect that women buy video games, and they want more of that money.