We Choose To Go To Mars 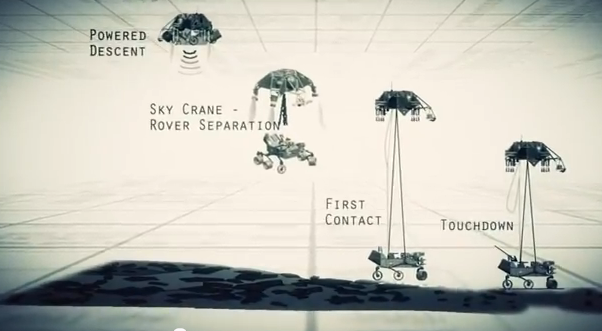 This week, the Mars Space Laboratory “Curiosity” landed on Mars. It is an amazing technological accomplishment to get a 2000-pound nuclear-powered research vehicle onto the surface of another planet. In once piece, with everything functioning properly.

And, yet, we did it. And by “we” I mean the United States of America. We spent tax dollars on this program, two-and-half billion of them to be exact. And it was NASA engineers working out of the Jet Propulsion Lab in Pasadena, California that built and piloted the rover from Earth to Mars. We did this.

And we as Americans should feel great about this. We did something good. We did something that will benefit all of mankind - through technology and the information we gain from the surface of Mars. At a moment in history when so many things are going wrong in America, everyone should stop for a second and really appreciate what we can do when we stop chasing the almighty dollar, stop clamoring for more power, and just do something “because it’s there.”

Programs like this are important. And they are important for two completely different and orthogonal reasons. One is pure economics. The space program creates jobs. Plain and simple. Always has. Either directly through the building of space vehicles or indirectly through the technology that is derived from space exploration. So, even though it requires billions of dollars to run NASA and the space program, at least we get something in return. We get nothing back from unfounded wars for oil, or for sending foreign aid to countries who really aren’t our allies to begin with.

We were put here to explore. To explore our planet and vastness of space around us. We were put here to push the limits of what is possible. One hundred years ago, mankind had barely mastered powered flight on earth. Now we’re sending an autonomous rover to Mars, that can operate on the planet’s surface for almost two years.

And if that isn’t enough, accomplishing things like going to Mars just plain feels good. It feels good in a way that money and power and status can never hope to equal. Accomplishing great things feels good at the soul level. It makes one ask: “If we can do this, is there anything we can’t do if we really try?”

As Kennedy would say, we go to Mars not because it is easy, but because it is hard. Because it will measure the best of our abilities and skills. Obama plans to drastically cut funding to the Mars project and that is a mistake. Some people will gripe about the expense, saying the money should be spent here on Earth. But compared to defense spending, NASA is a drop in the bucket which has a high rate of return. And, truth be told, the money is being spent here on Earth. In America. Those are Americans building and operating that equipment.

If you were around when we landed on the moon you remember the feeling that we as a race had connected with something greater than our daily struggle to survive. When Kennedy made landing on the moon a national priority he changed the country for that decade. Despite all the unrest and problems, we still did something previously unimaginable.

Now imagine if that spirit could be recaptured. What if our next President (whoever he ends up being) made it a national priority to land humans on Mars and return them safely home by the end of this decade? What kinds of propulsion and energy technologies would be created? What means of nutrition or hydroponics would be invented to keep a crew alive for a year in space? What kind of communications, life-support, and materials would be created to make all this possible?

What if reaching for the stars fixed some of the problems here on earth. Are the odds of that any worse than continuing along the path we’re now on?